The Pitney Bowes Postage Payment Application had been running COBOL for decades on an HP NonStop Tandem mainframe, however, to seize the opportunities of the digital cloud age and to reduce overall technical debt, Pitney Bowes needed to modernize the Tandem COBOL to C# .NET Core. Just as important as the code, the HP NonStop Tandem database needed to also be migrated to a modern Microsoft SQL Server database and deployed to AWS. TSRI successfully transformed the application at 99.96% automation, and deployed the modernized application on the AWS cloud.

The State of Washington’s Office of the Superintendent of Public Instruction (OSPI) awarded a sole-source contract to TSRI for modernization of the State’s Apportionment System.

Automated Refactoring: The Critical Component to Achieving a Successful Modernization

Using automation to modernize mainframe applications will bring a codebase to today’s common coding standards and architectures. But in many cases, modernization to an application’s functional equivalent isn’t always enough. Organizations can do more to make their modern code more efficient and readable. By building refactoring phases into their modernization projects, organizations can eliminate the Pandora’s box of dead or non-functional code that many developers don’t want to open, especially if it contains elements that just don’t work.

What is Refactoring and How is it Used?

Refactoring, by definition, is an iterative process that automatically identifies and remediates pattern-based issues throughout a modernized application’s codebase. For example, unreferenced variables or unnecessary redundant snippets could exist throughout the application. This scan, known as dead/redundant code refactoring, will find repetitions of any of this unusable code to flag, then remove it from the codebase. One of TSRI’s current projects found 25,000 instances of a similar issue that would have required 15 minutes of manual remediation per instance—not including the inevitable introduction of human error that would require further remediation. The number of development hours would take more than a year for a single developer to complete.

Using TSRI’s automated refactoring engine, however, remediation was complete in an hour.

Calling refactoring its own post-modernization phase is, in some ways, misleading. Refactoring typically occurs all the way through an automated mainframe transformation. As an example, in a typical COBOL or PL/1 mainframe modernization, TSRI would refactor the code from a monolithic application to a multi-tier application, with Java or C# handling back-end logic, a relational database layer through a Database Access Object (DAO) layer, and the user interface (screens) modernized in a web-based format. Believe it or not, many legacy applications still run on 3270 green-screens or other terminals, like in the graphic below. 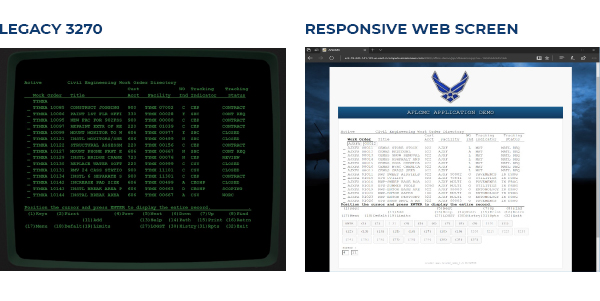 Once the automated modernization of the legacy application is complete, the application has become a functionally equivalent, like-for-like system. However, any deprecated code, functions that may have never worked as planned, or routines that were written but never implemented will still exist. A process written in perhaps 1981—or even 1961—may have taken far more code to execute than a simple microservice could handle today.

Before a formal refactoring process can begin, it’s important to understand your goals and objectives, such as performance, quality, cybersecurity, and maintainability. This will typically mean multiple workshops to define which areas of the modernized codebase need attention and the best candidates for refactoring, based upon the defined goals. These refactorings will either be semi-automated (fully automated with some human input) or custom written (based upon feedback from code scanners or subject-matter experts.)

The refactoring workshops can reveal many different candidates for refactoring:

What are the Challenges?

In conclusion, while an automated modernization will quickly and accurately transform legacy mainframe applications to a modern, functionally equivalent, cloud-based or hybrid architecture, refactoring will make the application durable and reliable into the future.

TSRI is Here for You

As a leading provider of software modernization services, TSRI enables technology readiness for the cloud and other modern architecture environments. We bring software applications into the future quickly, accurately, and efficiently with low risk and minimal business disruption, accomplishing in months what would otherwise take years.

See Case Studies
Learn About Our Technology
Get started on your modernization journey today!

New Book by Ulrich and Newcomb

As part of the Logistics Management System, the Weapon System Management Information System (WSMIS) is responsible for tracking combat capability and impending parts problems. The system was well regarded during Desert Storm for its ability to expedite repair or procurement of critical items. However this legacy COBOL system requires modernization to continue to fulfill its mission.

The U.S. Air Force's Weapons System Cost Retrieval System (WSCRS), designation H036C, was written in COBOL running on an Amdahl-5890 platform and using a flat file data base. The system required modernization by the Wright-Patterson Mission System Group (MSG) to improve base support for the Air Force weapon financial systems. TSRI transformed 100% of the WSCRS COBOL code into C++ and facilitated an error-free delivery to the customer several weeks ahead of schedule.