CRA and AWS engaged with TSRI to complete the modernization of their COBOL-based system to Java on AWS. To Achieve CRA's goals, TSRI tuned JANUS Studio® to parse, transform, document, and refactor the IBM z/OS COBOL application. In just 1.5 months, TSRI modernized the application from an IBM Mainframe COBOL and CICS monolith to a modern multi-tier architecture in Java on the AWS cloud. Just as important, TSRI also converted the DB2 database and VSAM sequential files to a relational PostgreSQL database on AWS Aurora.

The Pitney Bowes Postage Payment Application had been running COBOL for decades on an HP NonStop Tandem mainframe, however, to seize the opportunities of the digital cloud age and to reduce overall technical debt, Pitney Bowes needed to modernize the Tandem COBOL to C# .NET Core. Just as important as the code, the HP NonStop Tandem database needed to also be migrated to a modern Microsoft SQL Server database and deployed to AWS. TSRI successfully transformed the application at 99.96% automation, and deployed the modernized application on the AWS cloud.

System integrator CSC was contracted to modernize AT&T's billing code, written in the C language. CSC brought The Software Revolution, Inc. (TSRI) aboard to generate documentation of AT&T's code to assist in their modernization efforts.

Sempra Energy needed to move their Microgrid Control System (MCS) application into a more contemporary environment. The challenge that TSRI and mLogica faced was transforming Sempra Energy's existing Sybase OpenServer platform into a more modern .NET/MS-SQL server environment under strict budget and schedule constraints. The project, which included the modernization, documentation, refactoring, testing, and integration of the application, was successfully concluded on-time and within budget constraints.

"The successful modernization and cloud deployment of these four critical government applications is proof that the U.S. Technology Modernization Fund is beginning to fulfill its purpose."

The effort was the first of its kind to leverage the funds available to government entities via the Modernizing Government Technology (MGT) Act’s Technology Modernization Fund (TMF). With federal government mandates gaining further prominence and the bipartisan bill — the Legacy IT Reduction Act of 2022 — currently on the floor of the U.S. Senate, TSRI is well-positioned to support government entities in modernizing their outdated legacy information technology systems.

Critical and Aging Systems, Transformed for Modern Times
Despite incremental upgrades or patches over the years to this federal agency's decades-old mainframe applications, a dwindling supply of programmers made it increasingly difficult to maintain them. In addition, cloud computing would improve these mission-critical applications' reliability and security. Using TMF funds, this U.S. government entity sought to modernize several of its remaining critical systems on a legacy Unisys mainframe. TSRI provided automated code conversion of more than 1.3 million lines of the client's COBOL applications, with hierarchical DMS and relational RDMS databases, to the Microsoft Azure cloud. TSRI implemented Java as the target language and Microsoft SQL Server as the target relational database at 99.67% automation levels.

On day one after the production systems were switched over from the Unisys mainframe to the Microsoft Azure cloud, the new system supported 25,356 users and 299,715 transactions with only three user problems reported. These critical systems — responsible for managing, storing, and protecting personal financial and employment-related data for government-supported home financing — were seamlessly deployed to the new Microsoft Azure Cloud environment without impact on operations. The positive results could be seen in the first 30 days during which the new system disbursed billions of dollars in program funds to eligible users without a single error.

“The successful modernization and cloud deployment of these four critical government applications is proof that the U.S. Technology Modernization Fund (TMF) is beginning to fulfill its purpose,” TSRI President, Nicolas Newcomb, said. “This federal agency’s crucial technology now serves people more predictably and reliably while providing efficiency and cost-savings for the government and therefore, Americans. Furthermore, these applications can now be more effectively maintained and evolved now and in the future.” 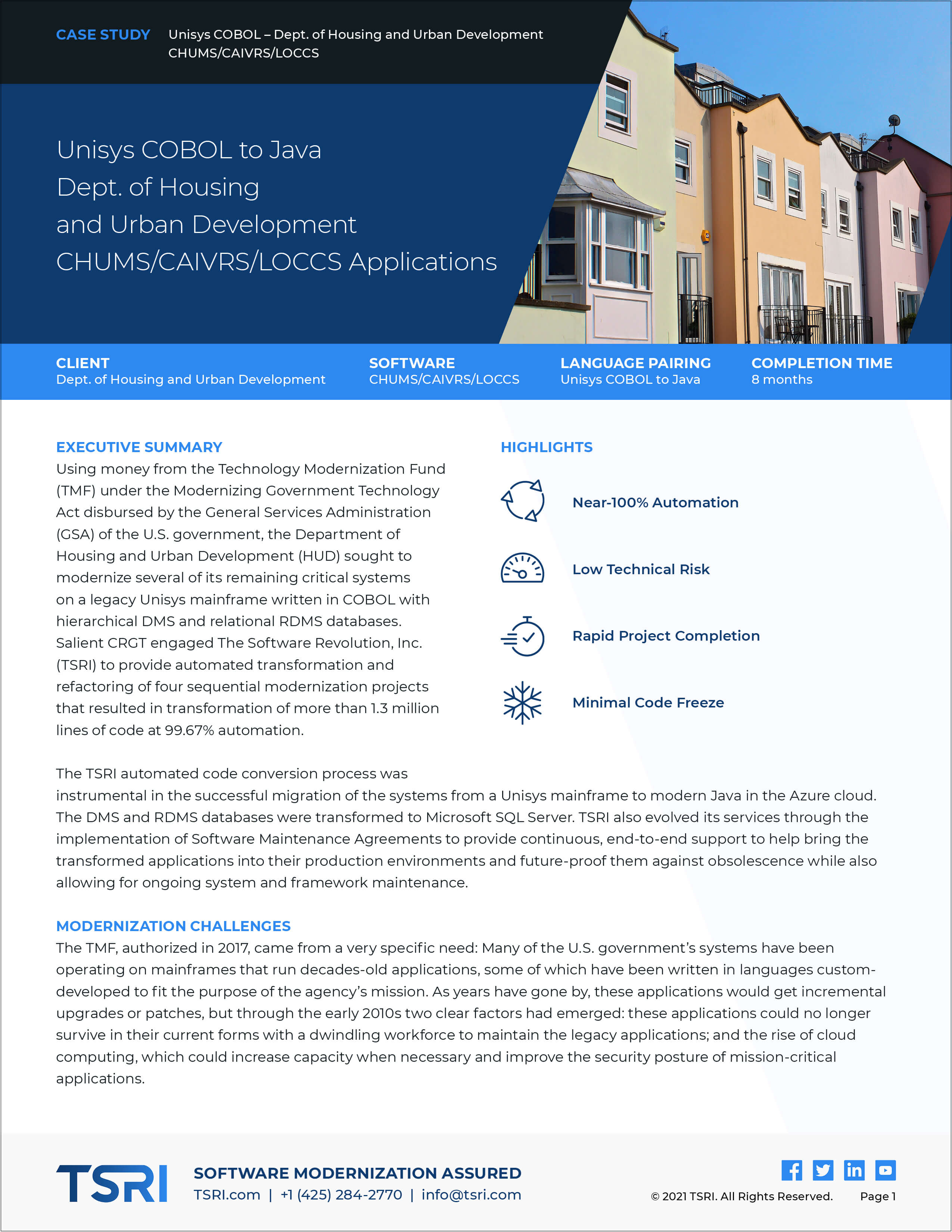 View the case study for more details on this government IT modernization project.

“Every year, the number of programmers required to maintain or improve the legacy systems we all rely on shrinks but that doesn’t mean we depend on those systems any less,” TSRI’s Nicolas Newcomb said. “We can say that this one federal agency’s crucial technology is now serving the American people more predictably and reliably, but there are still thousands of crucial, at-risk applications that we rely on to conduct our daily lives and business. We have never previously witnessed the scale and severity of technology obsolescence we may currently face.”

Nicolas continued: “TSRI can reliably and rapidly modernize — and frequently improve —these carefully designed systems. Cloud architectures offer predictable landing zones, and the sophistication of the foundational technologies have made modernizations more seamless than ever. Done well, a modernization accelerates the delivery of benefits to business bottom lines and improves the lives of end-users. Simultaneously, modernizations help relieve the liabilities caused by technical debt and human resource scarcity. In the end, application modernization is organizational modernization. Therefore, TMF funding is a responsible step to ensure our government is competitive, secure, and efficient. There should be no doubt that the time to modernize our crucial software infrastructure applications is indeed now,” he concluded.

TSRI has decades of experience modernizing applications in over 35 legacy languages for public sector, government, and military entities in the U.S. and beyond. Examples include the U.S. Air Force, the U.S. Customs and Border Control, the U.S. Navy, the Canadian Revenue Agency, and the Government of Denmark. View TSRI’s case studies for more.

TSRI is Here for You
As a leading provider of software modernization services, TSRI enables technology readiness for the cloud and other modern architecture environments. We bring software applications into the future quickly, accurately, and efficiently with low risk and minimal business disruption, accomplishing in months what would otherwise take years.

Northrop Grumman Mission Systems was tasked with the modernization the Mission Planning Enterprise Contract (MPEC)-related Autorouter.  This system was written principally in legacy FORTRAN code.  Northrop Grumman contracted TSRI to employ their automated modernization processes in this task, which also included the removal of dead and duplicate code, and the automated production of bridge documentation.

TSRI, in partnership with Hewlett-Packard, rapidly adapted its automated JANUS Studio® transformation engine to be ALC-compatible so they could conduct an ALC-to-Java prototype modernization effort for the US IRS. The high levels of automation enabled quick transformation and refactoring iteration, which rapidly and systematically discovered and isolated defects. Allowing TSRI engineers to quickly adjust the automated conversion rules, and quickly regenerate the system at higher output quatlity.

TSRI sub-contracted with Senryo Technologies to support the Assessment Modernization Plan for the US Railroad Retirement Board with Peridot Solutions LLC.  The effort involved the use of TSRI’s JANUS Studio® toolset to document 12,000,000 lines of code and comments which were written in COBOL, JCL, EasyTrieve, and Assembly.  The total comprised approximately 500 applications.